I bought a Pothos plant like a couple years ago. The mother plant has died since then and I have been trying to get the clippings to thrive since then. And doing a shitty job of it. I had some clippings sitting pathetically in glass vases filled with water. They were in the window, probably getting too much sun. They were light green and not really growing. I decided to pull them back onto the counter, and they started doing much better. I decided to remove them from water and plant them in soil. I put them all in a pot. They’ve been doing better since then. They’re green and get new growth, but nothing like the mother plant was when I brought it back from the store.

It’s Winter and I assume it would grow faster in hotter weather. But there is one particular vine that grew a bit long to the point where it was hanging off the side of the pot. I have it on the kitchen counter and there’s not too much room, so I wondered what would happen if I trimmed that vine and put it in water so it can grow roots, then plant it back into the soil of that pot to make the plant look fuller. I thought about it for a few months and finally decided to do it! And I really hope I didn’t make a bad choice! I am not an expert about exactly where I should be cutting the vine! 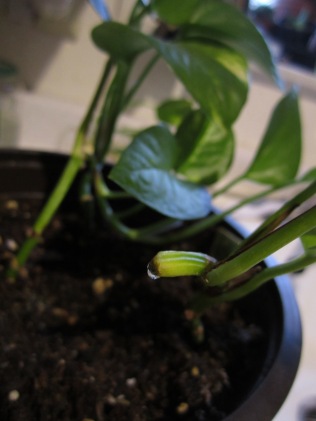 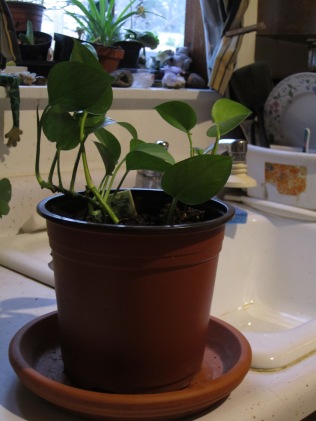 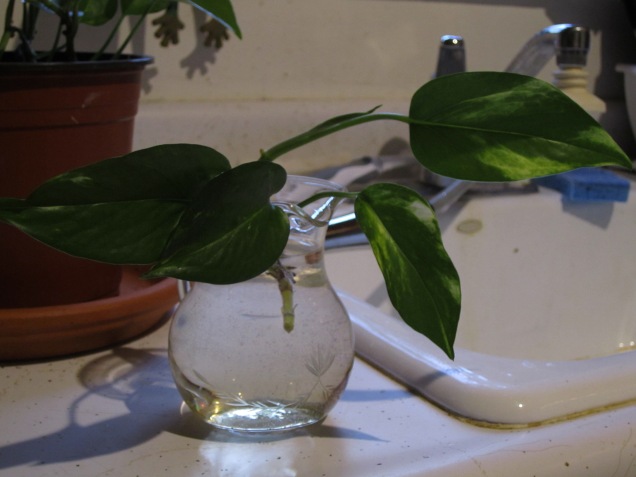 As you can see in the pictures, the stump the is left from where I cut is all leaky and unhappy. I hope it will heal and that piece will still create new growth. The new clipping has new growth on it, too, so hopefully I didn’t totally ruin that vines chance at becoming something great. I’d like to think that Pothos is a resilient plant, but I’ve only known it to seem like it’s looking for any excuse to fail. Boo.