My cat had surgery on the 18th. It went very well. He wasn’t himself afterward, as expected, due to the anesthesia and everything. It still stressed me out to see his spirits low and lethargic. Not much of an appetite. He had to wear two cones because he has a long neck. A soft fabric cone and a standard plastic one. The plastic one was so long that I feared he couldn’t possibly reach the food in his dishes. He would try to eat and give up. I decided to take off the plastic cone if I could be in the room with him so he could eat and relax, then put the cone back on when I leave.

Day by day, he started acting normal again, took his medicine with ease. This felt a little easier for both of us. The doctor told me they tested the tumor tissue and he is cured, which is great news! He would just have to keep the cones on and stay away from his tail until his vet visit on April 1st, which is this coming Monday. He didn’t seem interested in his tail at all. He was just enjoying the extra attention and spoiling. He took all his medicine and was healing great! It really felt nice to see his personality come back, even with a little extra!

But today something went wrong. I took the plastic cone off so he could eat before I left for work. I was in a rush and forgot to put the cone back on before I went to work. I came home and discovered he pulled at his stitches! I tried to take a picture to take a long look at it because he keeps moving around. There was a little dried blood and the stitches are obviously pulled. I don’t think he opened the wound, and really hope the bleeding was from the moving of the stitches. 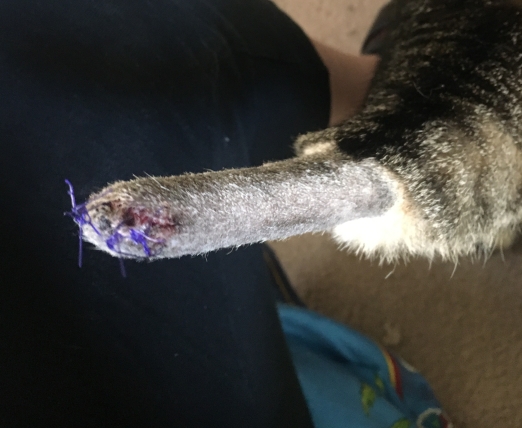 I was really upset, disappointed that I forgot the plastic cone. If his tail gets infected or healing takes longer, I will have let him down. I keep checking it and it looks like the blood as dried and healing has resumed, but let’s see what the vet says Monday.

Needless to say, the plastic cone isn’t coming off anymore. He will have to wear both cones until Mondays visit.